House Calls: Inside a Lovingly Restored Treme Townhouse That’s Made for TV

This 160-year-old townhouse is "New Orleans on steroids"

This story is part of a group of stories called

Curbed's weekly original tours series takes you inside homes with eye-catching style and big personality—from modern tiny homes to pedigreed midcentury gems and everything in between.

Will Germain snaps into tour guide mode as he walks through his Treme home. Although he has likely given the tour of the 160-year-old townhouse a thousand times, he still excitedly rattles off the story behind the details of his lovingly pieced-together home. Saved from neglect, and saved again after Hurricane Katrina, there’s an explanation behind everything here — every object, photograph, piece of furniture, and the house itself. 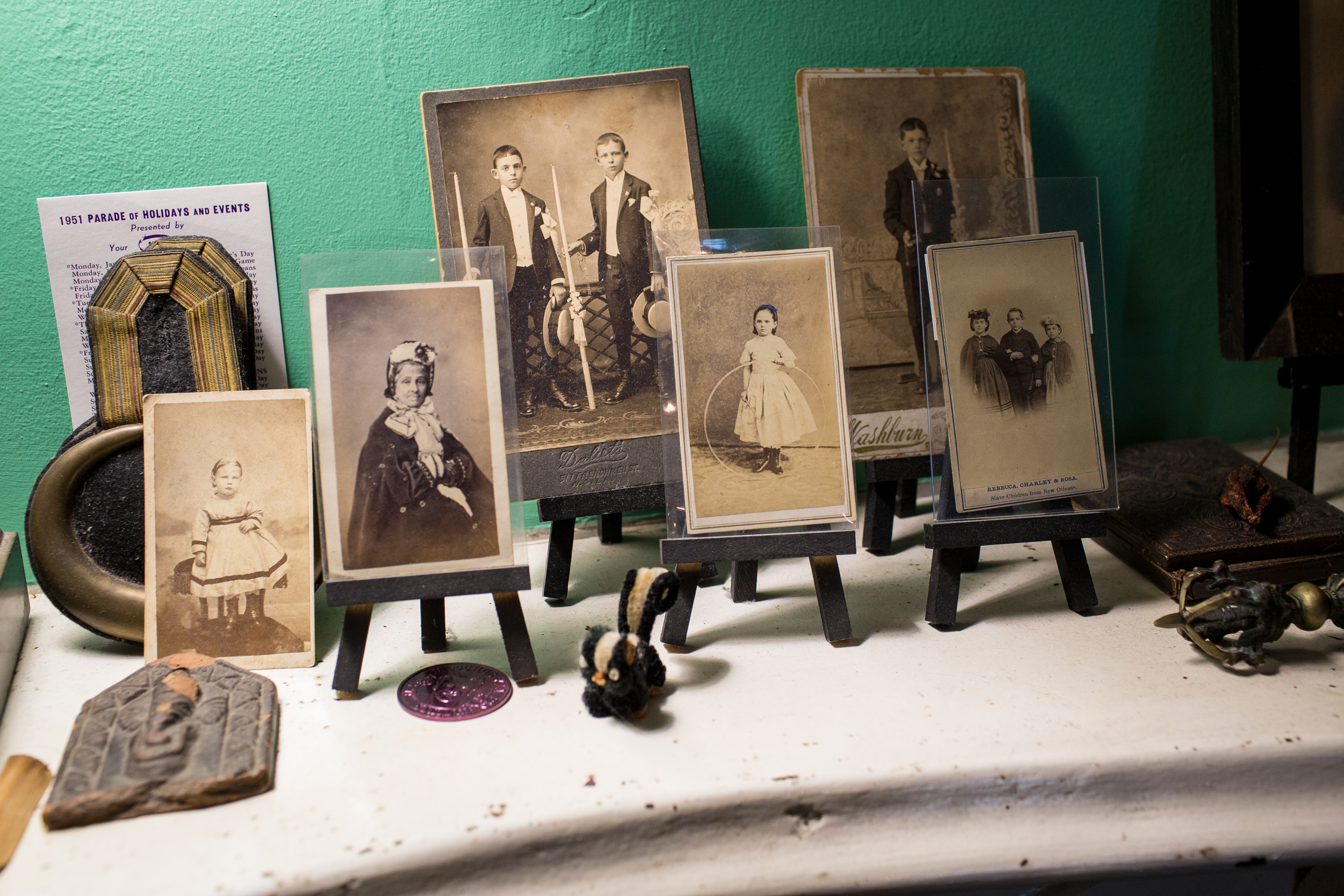 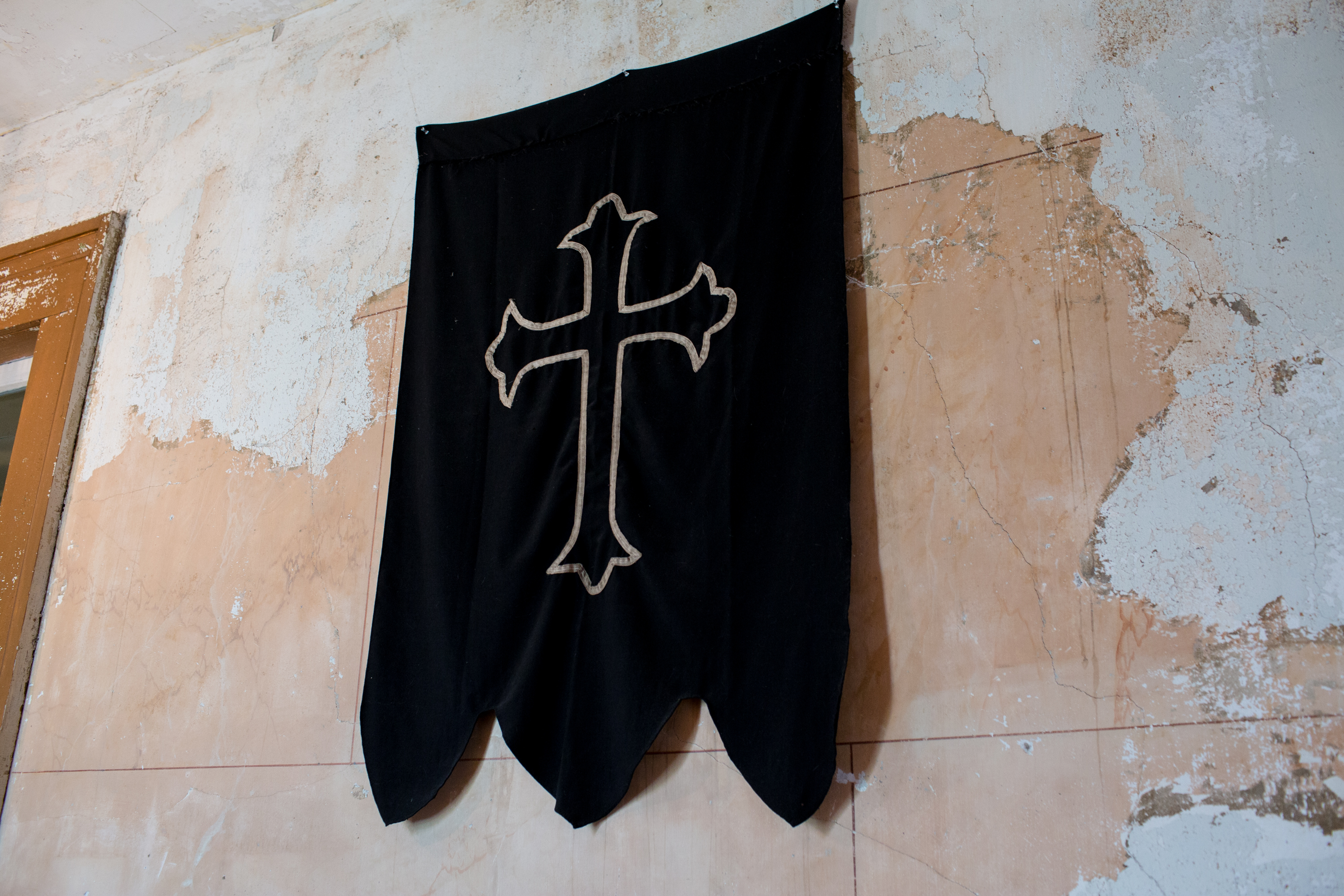 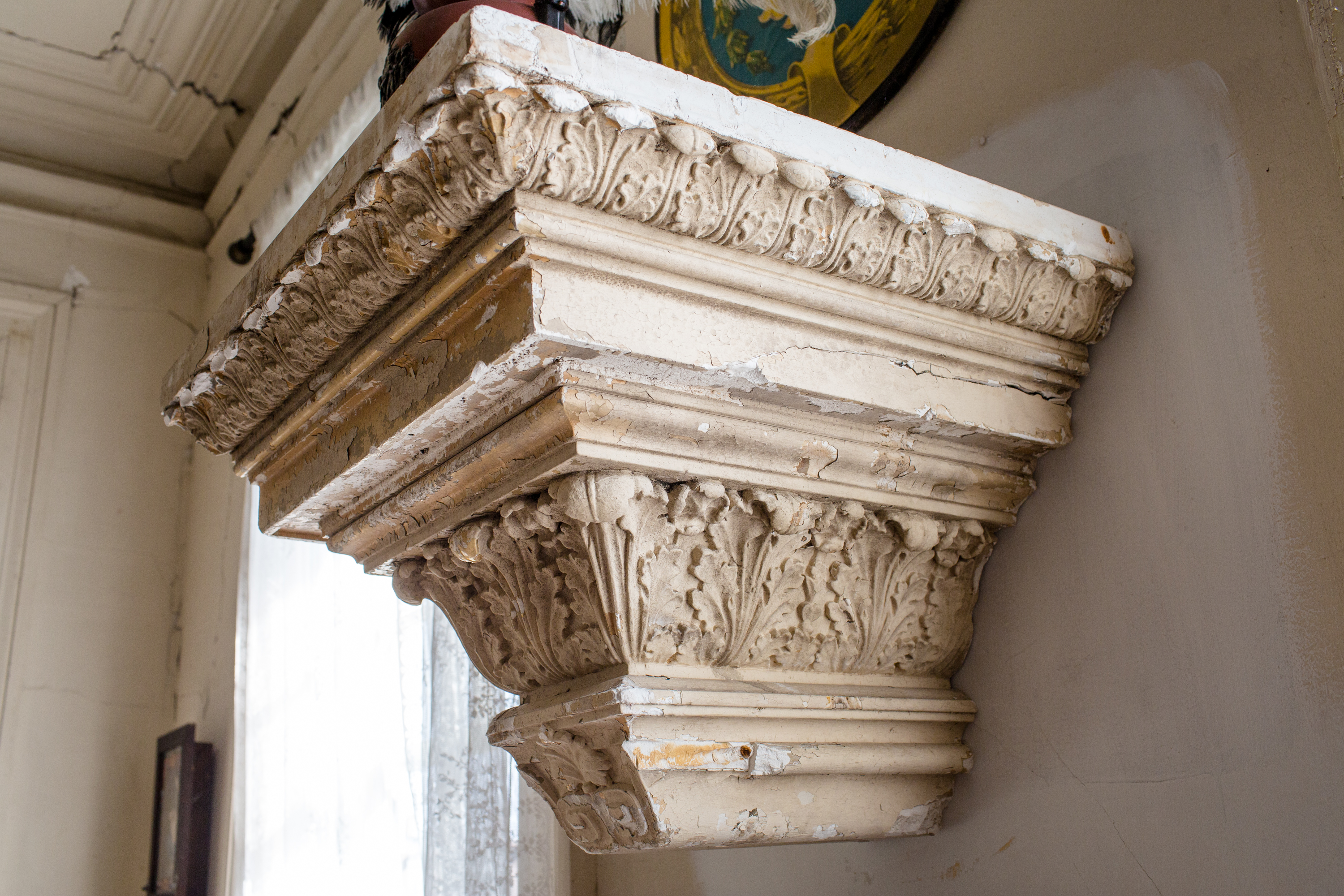 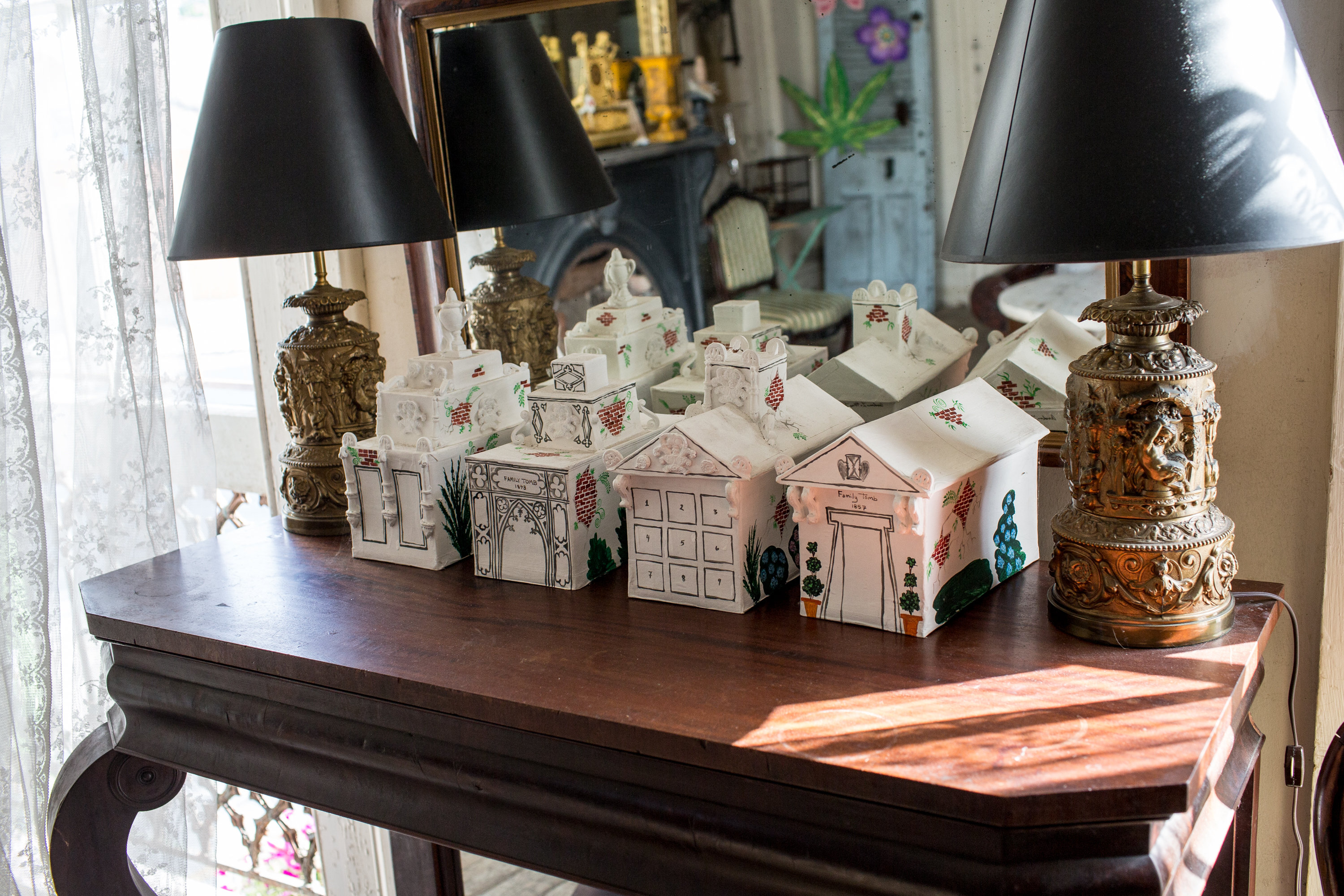 "The history here in this city is so amazing, and everything has a story," Germain says. "I was trying to encapsulate true New Orleans."

The townhouse also has an amazing history, from its origins as the home of a free woman of color, to its recent history as a filming spot for many New Orleans-shot TV shows. Germain and his partner, Mauricio Colmenares, have left their mark on the place for a look Germain calls "New Orleans on steroids."

[The owner] wanted someone who wasn’t going to chop it up into apartments, lower the ceilings, and all that kind of stuff. I convinced him that I was the one to take care of this house.

Living in Maryland and tired of the cold, Germain — who first moved to New Orleans in 1984 — was eager to return to the city. When shopping for homes, he was tired of the generic homes with generic restorations on the market at the time. By luck, a friend knew of a home in Treme, built in 1855 and left vacant for 15 years, whose owner was willing to sell if it was going to "a good home."

"I wanted something that was old, that had character, that was untouched. And it just happened," he says. "[The owner] wanted someone who wasn’t going to chop it up into apartments, lower the ceilings and all that kind of stuff, and I convinced him that I was the one to take care of the house."

The house was in bad shape when he saw it — it was abandoned, boarded up, and filled with trash. But seeing the hallway walls, which once had murals on them, he knew he wanted the house. And for the most part, a lot of the historic details — like the gorgeous fireplace mantles — remained. 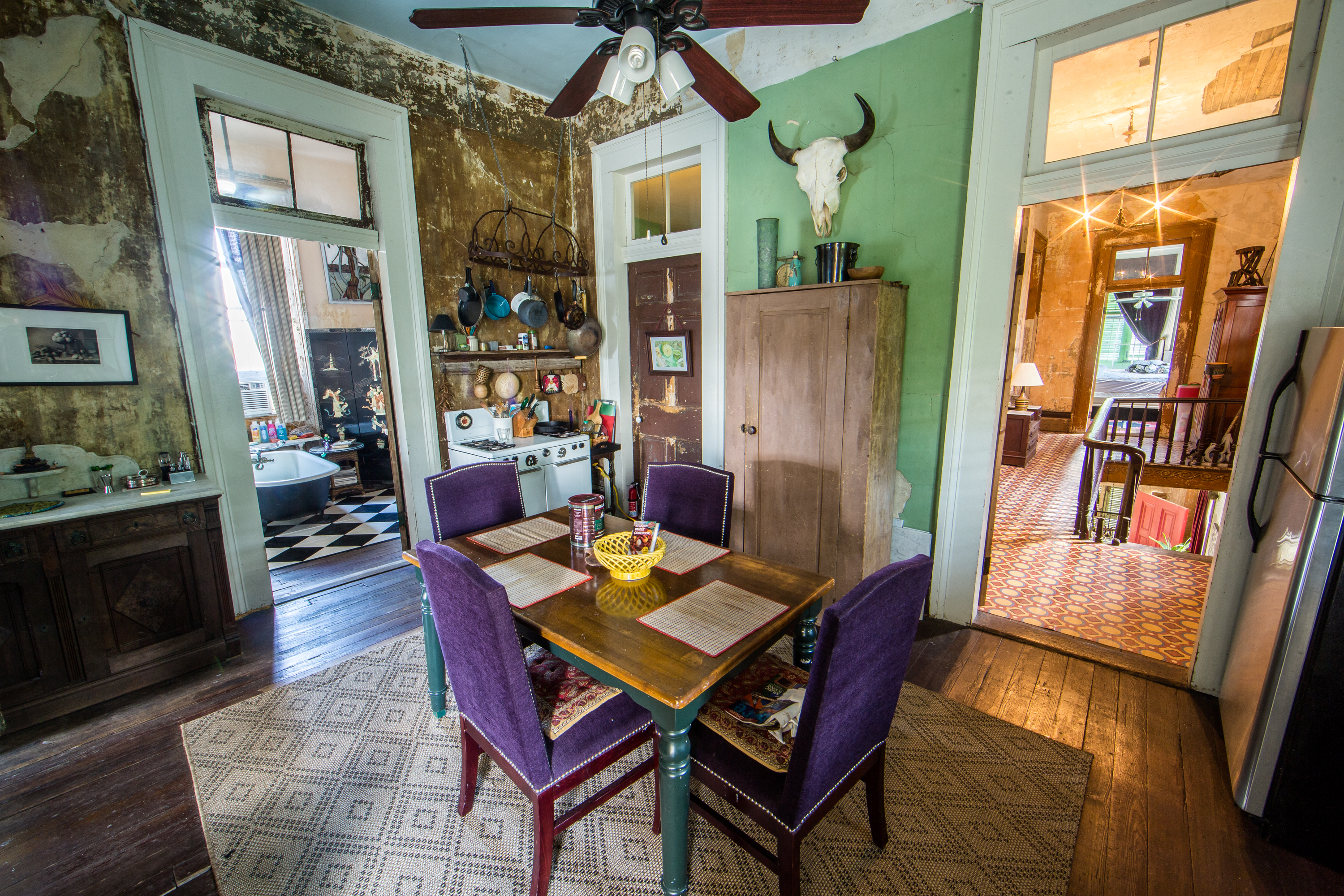 "It’s a miracle that just the pocket doors were missing," he says. "The mantles had been unhooked because people tried to steal them, but they were too heavy. Thank God nobody set the house on fire or anything."

A history buff, the story behind the home also appealed to him. Louise Vitry, a free woman of color, and Achille Courcelle, built the house in 1855. Courcelle was a builder for prolific Louisiana architect Henry Howard; and while Germaine hasn’t been able to prove it, he believes there’s a strong possibility Howard was the architect for this house.

Germain worked on the house until Katrina and the levee failures, whose winds knocked off the roof and the back of the house, and filled the house with a little over a foot in floodwater. Katrina was a huge setback for Germaine and Colmenares, who had officially started dating around then, but they gained a lot from the experience. 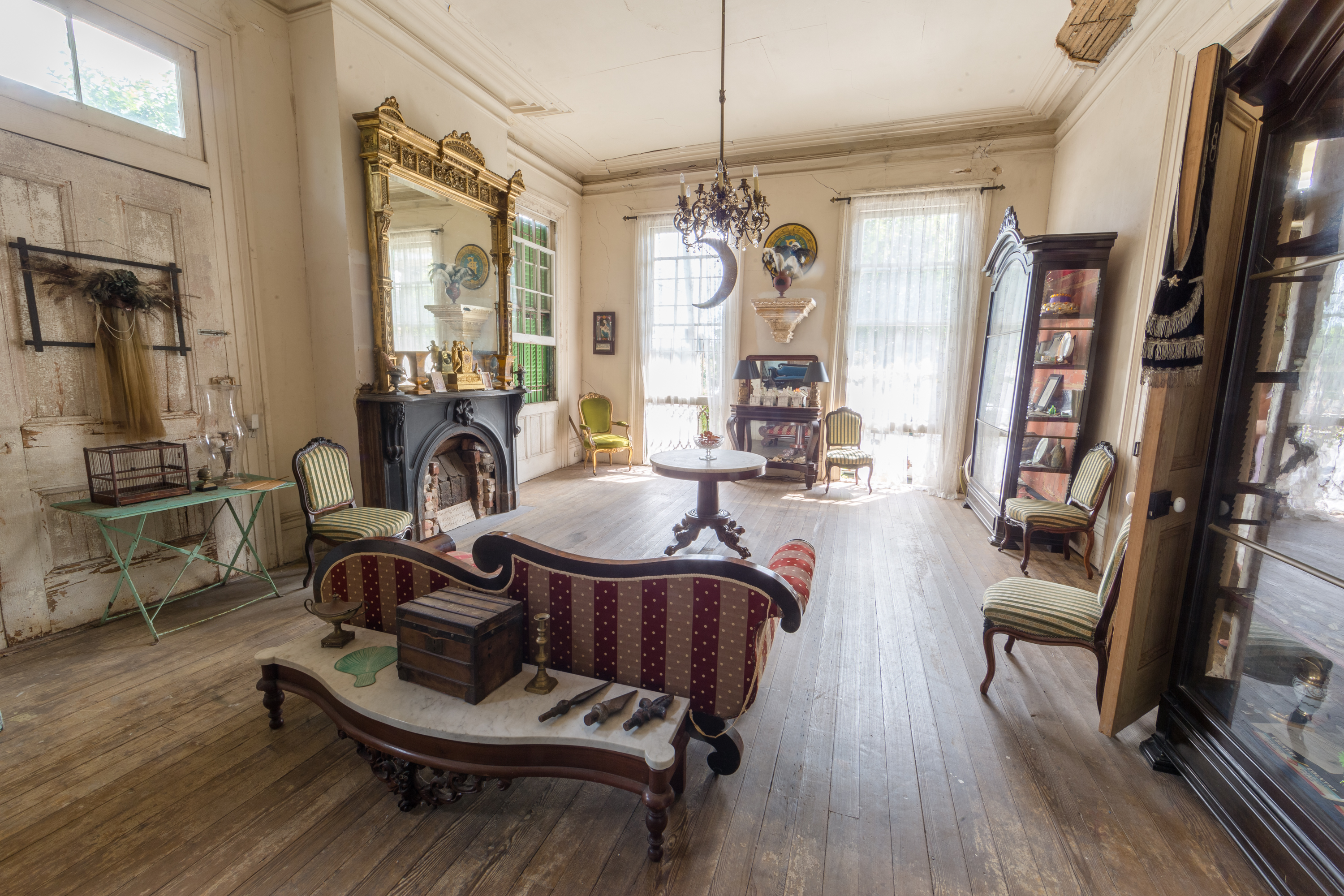 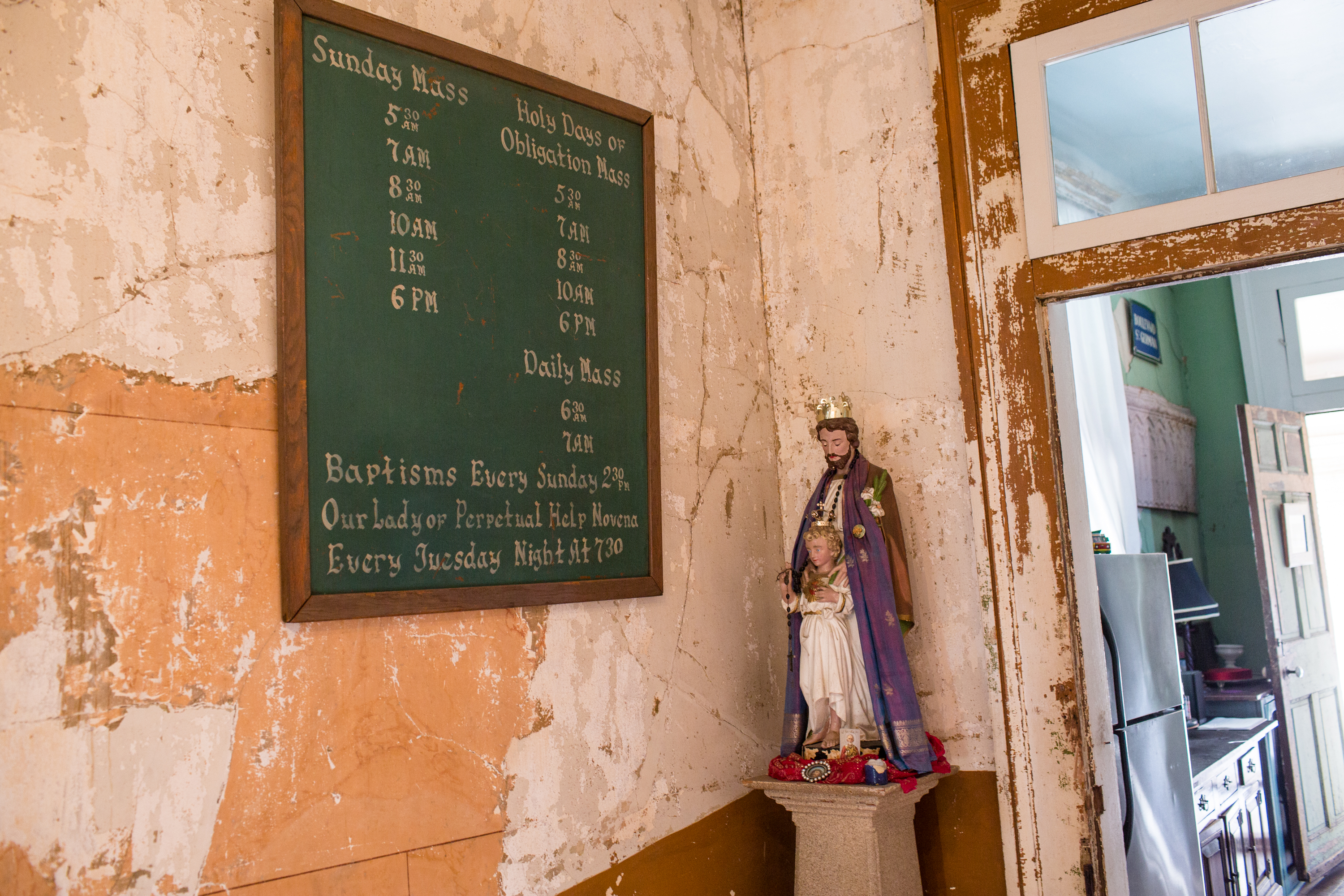 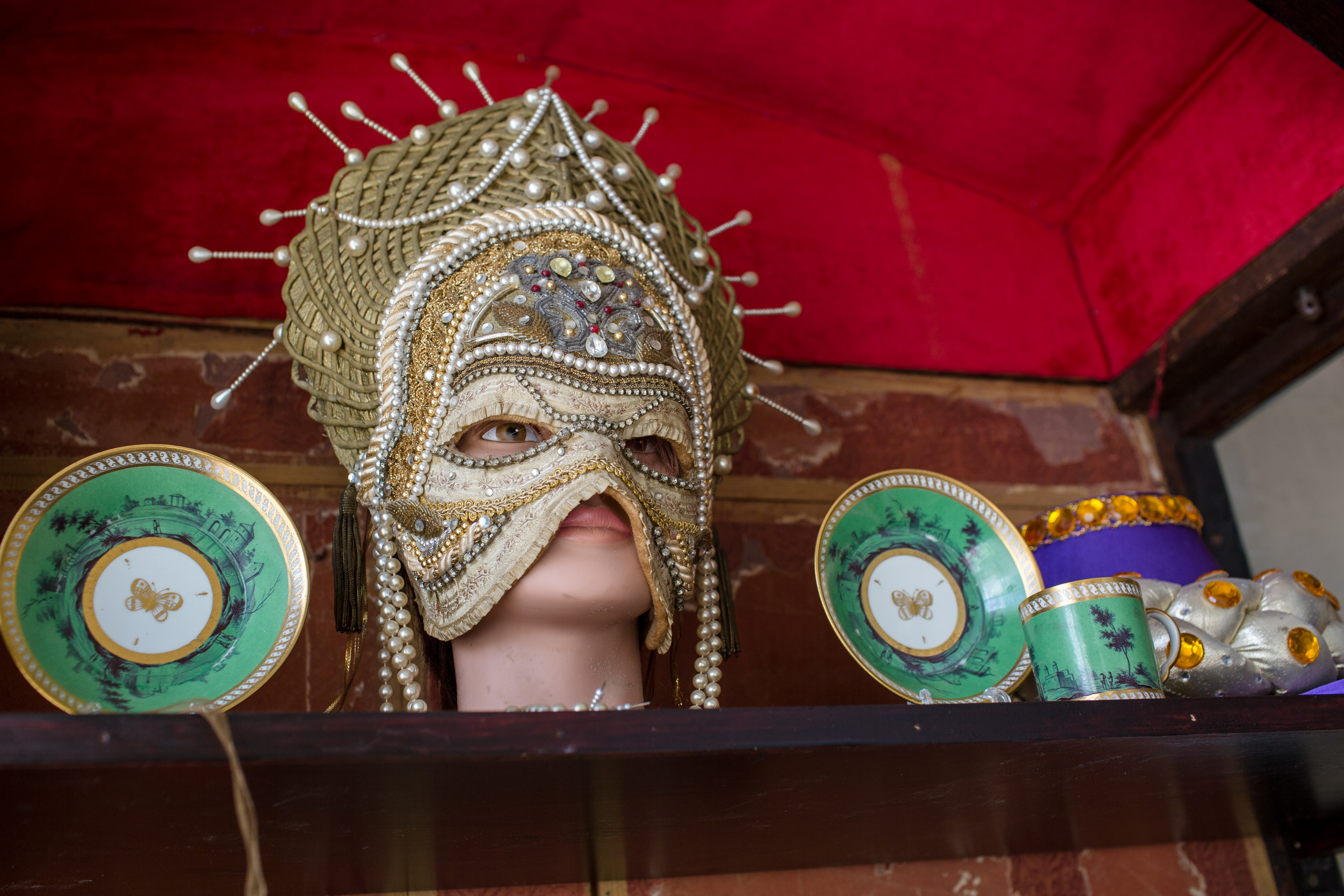 First, they learned to not borrow money, which is tempting in a house they nicknamed "Our Lady of Perpetual Projects." The house has some plasterwork that needs fixing, and the couple wants to add a new kitchen upstairs, but they prefer to tackle the projects when there's money in the bank.

And second, since they lost everything in the storm, the house filled up with objects and furnishings that were hand-me-downs from friends, found in trash piles or dumpsters, or won on eBay. Even when it's not out of necessity, Germain prefers to scavenge, or find things in estate sales and consignment shops, rather than buy anything new.

Germain has extraordinary luck in those castoffs, though: He found a tombstone from the family that built the Cabildo; beautiful old Russian absinthe bottles; a pew and bracket from the trash of a nearby church, among other objects that fill the home. He even found an original photo by E. J. Bellocq, the famed Storyville photographer, in an auction.

"I’m a junk collector," Germain says. "One of my other names for this house is ‘One Man’s Trash.’"

I’m a junk collector. One of my other names for this house is ‘One Man’s Trash.'

With its high ceilings, swampy marbled walls, and overall Southern Gothic look, the house is a perfect location for New Orleans-centric TV productions. Before we met, a Canadian crew filmed a crime show in the home, and "NCIS: New Orleans" filmed there before that. Most notably though, this is the location for many pivotal scenes of "American Horror Story: Coven."

As we tour the house, Germain shows me "Coven" points of interest: A four-posted antique Louisiana-made bed upstairs that was the birthing bed for Angela Basset, playing Voodoo queen Marie Laveau; a back room downstairs was the "sensitivity training room" where the severed head of sadistic slave owner Madame LaLaurie (Kathy Bates) appeared on a table.

Germain says the film crews are respectful, and the productions help pay for projects around the house, like a screened porch facing a colorful backyard. Germain and Colmenares run a gardening business, and the lush backyard doubles for work and play. 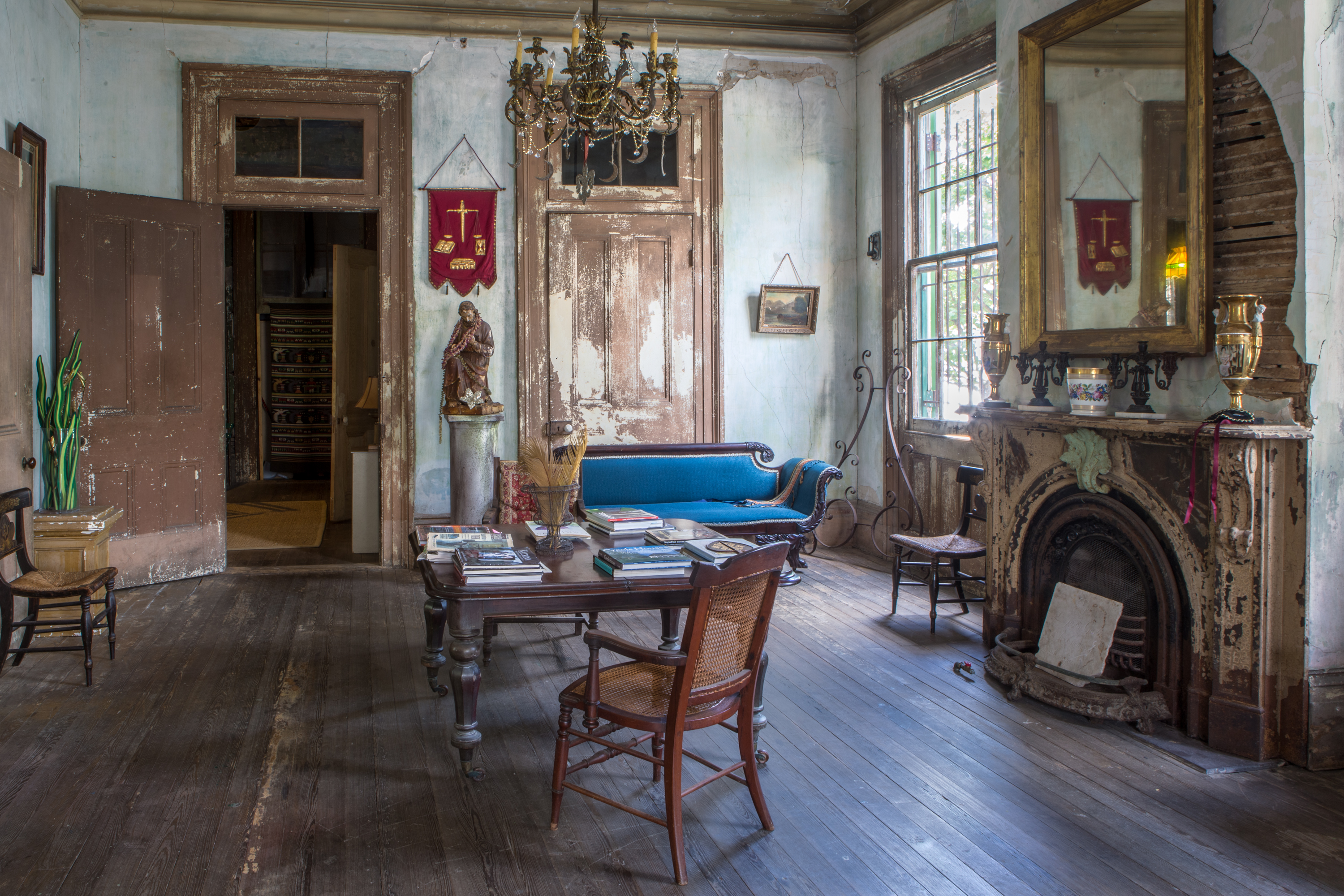 Upstairs there’s a breezy balcony, restored from rotting, that overlooks Treme, which has friendly, neighborly feel. You can see the many trees Germain planted around the neighborhood, which he thinks totals about 75.

"We put down roots in this neighborhood," Germain says.

In the room upstairs, a fireplace mantle displays old photos, like a Voodoo ancestral altar, of New Orleanians, including Louise Vitry. Germain is in touch with Vitry’s great, great, great granddaughters, one of whom sent him that photo. He feels a lot of honor and pride in being the steward of this home, and the history that lives within.

"I don’t think many houses have a photo of the original owner with it still," Germain says. "People ask me all the time, ‘Is the house haunted?’ No, but I think Louise appreciates that I’ve done this."

A Rhode Island farmhouse that’s beachy without being ‘overly nautical’

A Back Bay brownstone that’s “highly, yet invisibly” functional

View all stories in House Calls