This story is part of a group of stories called

Curbed's weekly original tours series takes you inside homes with eye-catching style and big personality—from modern tiny homes to pedigreed midcentury gems and everything in between.

Jamie and Stephen MacDonald always knew that their eventual home together would be a place for friends. Before buying a house in Mid-City, they lived in a bustling double that housed four people on each side—all friends and bandmates.

"We were always hanging out," Stephen, who plays bass in the band Sweet Crude, says. "We definitely realized early on we liked to host people, even just for casual things."

Jamie and Stephen’s home now, a converted double practically down the street from that rental, is a built around a love for their friends and each other—it’s a space that lends itself to entertaining, is filled with meaningful art and objects, and holds a lot of memories for the couple. It’s also extremely stylish.

Jamie, an occupational therapist by trade but an interior decorator at heart, happened to be driving around Mid-City when she saw a contractor working on a house. She asked about the double shotgun, which was being renovated to put on the market, and he let her take a look. She knew this was the house.

"It still had all the character of a New Orleans house, even though it had already been renovated," she says. "The doors and floors were original. They left the things that told all the stories."

"I pretty much just wanted a front porch," Stephen says. The house had a long front porch, and also a backyard for the couple’s Great Danes, Nola and Bowser. 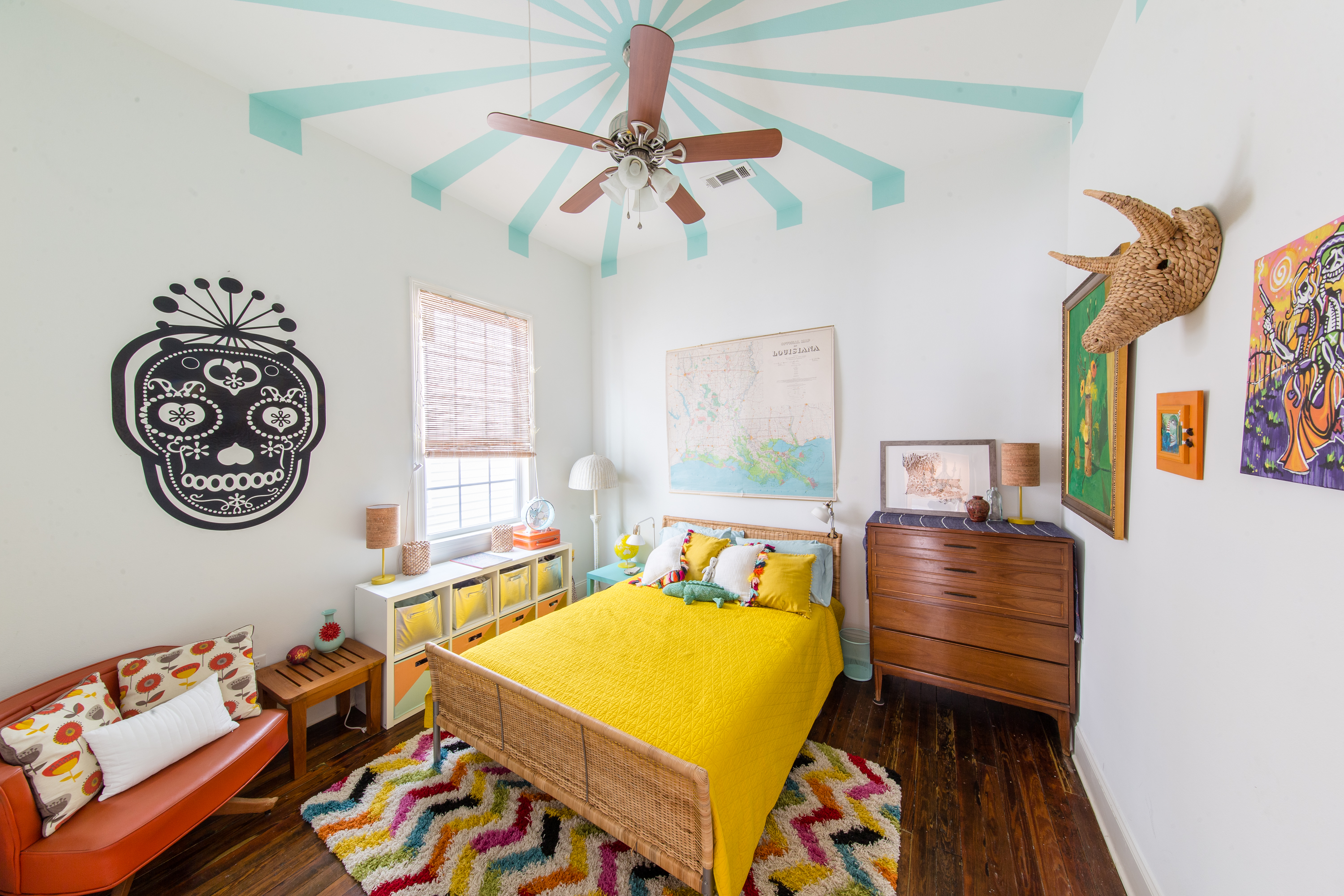 After moving in, the first thing the couple did to the "super beige" house was paint all the rooms different colors, starting with the dark teal in the living room. The bold color choice even compelled a Lowe’s employee to ask if they were sure about the decision.

"That kind of dark color is risky, but in New Orleans houses with tall ceilings, you can get away with a lot of dark color because of the amount of light that comes in," Stephen says.

In another bold paint decision, Jamie enlisted the help of her friend, artist Jeff Miller, to paint a circus tent-esque sunburst design on the guest room ceiling. She made some other fun, but less permanent, changes to the wall with gold feather decals in the living room and a sugar skull decal in the guest room.

Colors are big in this house. Jamie loves Mexico, and Day of the Dead influences are everywhere—from the bright accents and skeleton-centric art, to the sugar skull decal.

As they wanted, the couple’s house has become a big gathering spot for friends. They have an "open-door policy" for Saints games ("People don’t even call," Jamie says. "They just come over Sunday mornings.") and the house is the perfect spot for the couple’s annual "Fancy Christmas" party.

Even when they’re not there, the couple’s friends always have a presence in the home. In another room, posters the couple has collected over the years for Stephen's and their friends’ bands make for a colorful gallery wall. The piano in the dining area was a wedding gift from Stephen’s music friends.

While Jamie loves shopping and hunting for modern-minded decor, most of the furniture pieces here are "Craigslist finds, and many objects and art here was found in the couple’s travels or are items with sentimental value.

"My furniture pieces are normally midcentury. I like them to be set off the ground—probably because of the dogs, I nee to be able to clean under things," Jamie says. "But everything that’s decorating my house is personal."

Another sentimental aspect to the house is it’s the place where Stephen proposed to Jamie. He popped the question in the bedroom, while the couple was up late cleaning for the Fancy Christmas party. Jamie was in her pajamas.

"That’s part of the reason why I have a hard time thinking about getting rid of the house," she says. "We’re really, really attached to it. We changed it and made it our own, and added so many things. It was so blank and beige, and now we’re throwing memories everywhere. I really feel like it’s growing with us, and the dogs love it."

A Rhode Island farmhouse that’s beachy without being ‘overly nautical’

A Back Bay brownstone that’s “highly, yet invisibly” functional

View all stories in House Calls